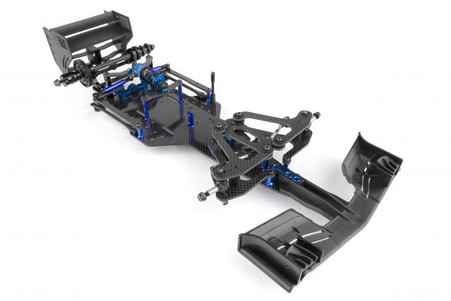 Team Associated is proud to release its entry to the 1:10 scale 2WD electric formula car racing class, the RC10F6 Factory Team Kit, geared for precision and the ultimate in performance.

Full-scale Formula racing is considered one of the most elite forms of racing in existence, with technology and looks off the chart. The engineers behind the doors of Area 51 put maximum effort into the design of the RC10F6 FT kit to make sure the same could be said about their scaled-down version. With a full cast of setting options, an ultra-low center of mass, and sleek styling, the RC10F6 FT is designed to put you at the front of the Formula grid.

With an increase in entries greater than any class at the highly contested ETS series, Formula is growing at a rapid rate. All aspects of the RC10F6 FT were considered and optimized to make sure it would stand above its competition. Performance, adjustability, durability, and style were weighed heavily, and the RC10F6 FT kit shows its hand with a complete package of adjustments and options right out of the box. From front to back, with graphite control arms, the fully adjustable front end, the ultra-smooth rear pivot, and wings styled after current full-scale Formula rulings, no corner was left untouched. At an affordable price point, the RC10F6 FT comes with everything to assure you will be at the front of the pack. With such a well-balanced platform, it's easy to see that the RC10F6 FT kit is another Champion by Design from Team Associated!

This product hasn't received any reviews yet. Be the first to review this product!